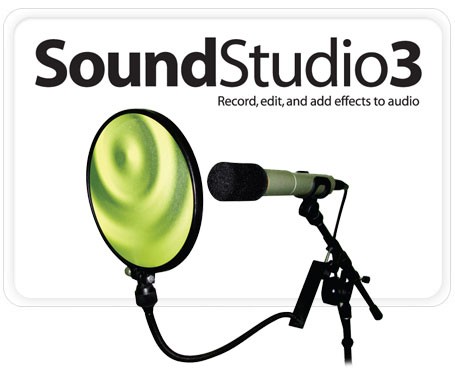 I have been using SoundStudio 3 ($79.95) for a lot longer than I realized, which is a good thing! It tells you that this is an easy product to get along with and that it ingratiates itself very well.

“Sound Studio 3 is an easy-to-use Mac OS X application for recording and editing audio digitally on your computer. Digitize tapes and vinyl records, record live performances, create your own mixes with crossfades, tweak the levels and EQ, apply digital effects, and save in all major file formats with Sound Studio 3!”

I am still some way off where I want to be with my audio skills, but that is certainly more a function of time and my own aptitude than anything else. I certainly can’t blame SoundStudio. I have been using it primarily to record the segments with Tim, both the conversations and a few review pieces and I have found it very easy and pleasing to use. I have also used it to record some audio dialog for an idea I am working on, and to tidy up some imported audio that I have recorded on a portable device for a project that I am working on. In short – it is a great ‘all rounder’ of an application.

Setting up is easy, with no complicated preferences to confuse or concern, and using it is very straightforward. There are certainly enough options for me with what I am doing.

The editing options are good, but not exceptional – from time to time I use an alternative but I really can recommend this product.

For those of you that have used SoundStudio before the Top 10 changes in Version 3.5 are:

For those of you that want the detailed features here they are: